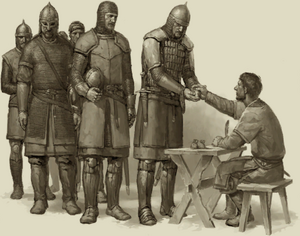 Wages are automatically paid to your troops every 168 hours (seven days) in every game up until Bannerlord, which pays wages daily. If you do not have enough money to pay, you will incur a debt and your party will lose morale. You will attempt to pay off any debt the next time you pay your troops, if you still don't have enough, your debt may increase and your party will lose morale again.

Base wages are paid by each troop's level, it is then further calculated depending on several factors.

Note that mounted mercenaries receive both mounted wages and mercenary wages, making them even more expensive than a companion of the same level. Giving a companion a horse does not change their wages.

The following is a table of base wages up to level 60. Note that the Nord Huscarl and Swadian Knight are the highest-leveled normal troops in the game at level 28. This means only companion can reach the higher numbers. Theoretically, there is no level cap, but an overflow glitch occurs after level 62 and the experience required per level increases at an abnormally rapid rate after 59.

* Wages cannot be 0, so all troops at level 1 would receive the minimum wage of 1.

The following tables are some examples of different troops at various levels comparing the factor of your Leadership skill.

In Mount&Blade: With Fire & Sword the weekly wage of each troop is calculated, with integer truncation in each step, in the following way:

The weekly pay also depends on the following factors:

You should note that Mercenary Camp troops only become cheaper than normal troops from level 18, which means that only mercenaries upgraded to elite are cheaper than regular troops.