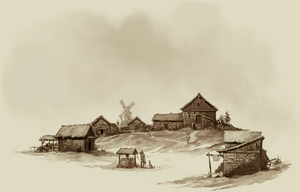 Villages can be found all over Calradia or Eastern Europe. Each one is tied to a nearby fortification, both financially and politically.

You can buy goods from the village or force them to give you their supplies; forcing them will lower your reputation with them. The reputation only lowers when you actually enter the loot screen, so if you accidentally choose the wrong option you can pick "Forget it" and avoid the reputation penalty. If the village populace sees your army as weak, they won't cooperate with your demands and will instead fight against you, their village being the battleground. 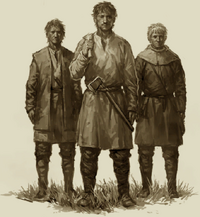 Unless the villagers dislike you, you can "Recruit Volunteers" to your party. The amount and quality of the volunteers depend on your Renown and reputation with the village. If you decide to recruit them, you will pay 10 denars each to help them with their equipment. This fee is static, regardless of troop quality; if the proposed volunteers are of a higher tier, they will still cost 10 denars each, thus saving some upgrade money.

The troops you get are always from the faction the village is originally from.

You get another chance to recruit any time your reputation with the village changes, so recruit before helping a villager or progressing on a quest and recruit again after the reputation changes to gain additional volunteers.

If you have 10 or more reputation with the village while at war with its faction, you can still recruit from them, but this will result in less morale for that faction's troops. 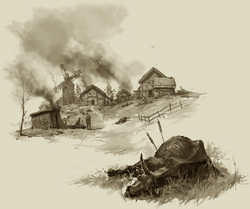 Unlike fortifications, villages cannot hold a garrison. If the village is attacked, only the farmers are there to defend it. Building a Watch tower will lengthen the time it takes for a village to fall, thus allowing you to come to their rescue. The villagers will fight to assist you, although their resistance will not be very powerful. Looting a village will reset the prosperity of the village to 0, deteriorate the relationship with the kingdom by 5, with the lord of the village by 5 and with the village itself by more than 30.

If the village belongs to another faction, you can "Take a hostile action" and "Force the peasants to give you supplies" or "Steal cattle". If you're at war with that faction you can also "Loot and burn the village". The amount you steal depends on your looting skill and the current prosperity of the village. Doing this will always decrease your standing with the chosen village and faction it belongs to.

Raiding a village is an excellent way to get food and money, provided the village populace deems your army too strong to be defeated. Typically, there will be about 2000-2500 denars/thalers of goods, and a large amount of food, in addition to the village's cattle. However, raiding a village takes about half a day to a full day in game time, and leaves you vulnerable to being attacked by a stronger party, as you are unable to cancel the raid and run away.

Looted villages tend to start functioning again in between 10-20 in-game days. This can be loosely monitored by the visual representation of the village on the map. If the village is smoking, it has been recently raided. If it has been looted, but not smoking, it is close to being rebuilt. Note: being able to view the smoke requires having the "Particle Systems" option turned on.

Prosperity can be increased by completing the "Bring wheat to (village)" and "Deliver Cattle" quests, by building a Mill and by making sure villagers reach the town to trade and come back safely.

If a village is infested by bandits, its prosperity will drop every three days until the bandits are dealt with or leave on their own.

If the village is unremarkable or poorer, you can sometimes find an unemployed villager by asking "How is life here?". If you give 300 denars, your reputation with the village increases by 1. The owner of the village might tell you he approves or disapproves of your help, depending on his personality.

If the village belongs to you, you can "Manage this village" and build improvements. The time and money it requires to build them depends on the engineer skill. You can build:

You can talk to the Village Elder if you select "Go to the village center"; he's the only villager that is always stationary. He can: