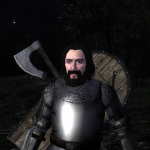 Hi. You recently edited the Aethrod article with the question "There are mistakes inside the original text itself, and I fixed them. Is my edit reasonable?"

I looked at Tephra's wiki editing tips, and according to that:

The game overrules the above
If the game spells something a certain way and your spell check flags it, go by the game."

However, most of the examples seem to be focused on spelling differences like "honor" vs. "honour," not outright typos of the sort that are in some of the character descriptions. It does say "game spelling overrules the above," (regarding correct spelling) not just "game spelling is a tie-breaker among correct spellings," so my thought is that the general guide is that game typos should be reproduced (maybe with a [sic] afterwards?), especially for direct quotations.

Re-introducing the old typos into the Aethrod article isn't a high priority, though. It's probably not a huge deal either way.

Yes, quotations from the game should reproduce misspellings. The most notable example of this is Lezalit who misspells his own name. Due to people constantly trying to "correct" the "mistake", I linked [sic] to the Wikipedia article on it for those who don't understand what it means and still try "fixing" it (though even that hasn't been 100% successful).
◄► Tephra ◄► 21:00, February 14, 2015 (UTC)

Villages' initial prosperity is randomly generated, so it is pointless to include it in the articles. It is slowly being removed from pages that already had it.
◄► Tephra ◄► 19:15, December 30, 2015 (UTC)

Resources produced by villages were removed because they are mostly randomized and vary from game to game.
◄► Tephra ◄► 16:25, October 3, 2016 (UTC)

I didn't know either. When you added the one picture, I just looked into it casually as I was curious why you didn't add the second one right away and was surprised to see there were supposed to be eight. Since you wrote into the image's description that there were only two, I knew you didn't know about it either, so I added them all myself.
◄► Tephra ◄► 18:03, December 24, 2018 (UTC)

Retrieved from "https://mountandblade.fandom.com/wiki/User_talk:ADazz?oldid=53569"
Community content is available under CC-BY-SA unless otherwise noted.