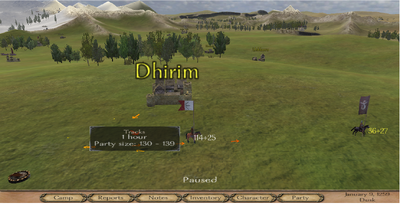 Tracks are shown on the map screen, and give you an idea of where other parties are. Rolling your mouse over them can tell you how large the party is, as well as a wealth of other information, depending on your skill level in tracking. Improving the tracking skill will allow you to see tracks from a further distance and will increase the time it takes for tracks to fade from the map. Increased tracking skill will also increase the precision of the party size estimate from the tracks and allow you to identify what type of party left them behind (caravans, farmers, bandits, etc.).

The tracks are colour-coded based on time elapsed and scaled to reflect party size. Arrows are initially red when fresh and transition to light blue to indicate old tracks. Level 1 of the tracking skill only allows you to see white arrows that give no indication of how old the tracks are. Level 2 enables colour-coding of tracks and allows the player to know the age of the tracks. With 14 in tracking, you can see tracks that were laid up to 21 hours ago. In contrast, with a low tracking skill, you can only see freshly-laid tracks. Eventually, tracks allow you to identify the type of party that passed through the area. Tracks are most useful for parties with large amounts of cavalry or for tracking large groups of infantry as it is easier to catch your prey if you're much faster.

The formula for determining what level of tracking skill is required to identify a party from its tracks is the remainder of the party template ID divided by 7, and then plus four. The party template ID is defined by the order that the party template appears in the file party_templates.txt. The first entry would have an ID of 0, with each subsequent entry increasing the ID by one. Sea raiders are the 14th entry in party_templates.txt, and as a result have an ID of 13. Applying the formula, the remainder of (13 / 7) is 6, which added to 4 makes 10, thus requiring a tracking skill of 10 to identify sea raider tracks.

Some examples in Warband: