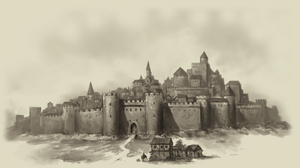 Towns are the commerce and industrial centers in Mount&Blade. They are supported by raw materials from the surrounding villages and trade caravans from other towns. The player will interact with towns frequently to rest, sell loot, purchase goods and equipment, and establish businesses.

The original Mount&Blade had 18 towns in Calradia. Mount&Blade: Warband added one more faction, the Sarranid Sultanate, along with its four new towns, increasing the total to 22.

(Note, Zendar was a neutral city positioned between the Nords and Vaegirs that players began the game in. It was removed from the game in patch 0.950.)

Periodically a town may host a Tournament:

If the controlling faction isn't hostile, you can do the following at a town:

If you own the town, you can do the following as well:

If you are also a monarch of your own faction, you gain one more option (unless the town is already your capital):

Guild masters allow you to do multiple things within a town. If your reputation with the town and its lord is above zero, or you are the town's ruler, you may buy land within the town for a Productive Enterprise, which will earn a profit each week based upon a myriad of factors.

Guild masters can also give you jobs and quests, which increase your reputation with the town. Some quests can improve the prosperity of the town, which influences goods prices and taxes. A full quest list can be found on the quests page, but some of these jobs are:

Guild Masters also give you information about the politics of Calradia and inform you of the prosperity of the town and surrounding areas. They also guide you as to which towns are most dangerous for your own trade enterprise.

Mount&Blade: With Fire & Sword replaces Guild Masters with Mayors and lets you build buildings and employ men for special jobs through them.

In Mount&Blade and Warband, you can construct two buildings: