The Secret of the Black Mace

Edit
watch 02:05
Wiki Targeted (Games)
Do you like this video?
Play Sound 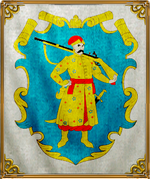 The Secret of the Black Mace is the main quest of the Cossack Hetmanate. The reward is to be the ruler of the nation and obtain the Black Mace. It is one of the three main quest lines in With Fire & Sword, with the other two being The Deluge and The False Dmitry.

It is important to note the following before starting this quest:

Unlike The Deluge or The False Dmitry, this quest is not based on any notable historical event, nor is it mentioned in the book With Fire and Sword.

Community content is available under CC-BY-SA unless otherwise noted.