Embers of the Flame
Hidden Hand

The Southern Empire is a kingdom in Mount&Blade II: Bannerlord. They have, as the other two empires (the Northern and Western Calradic Empire), a specialization in armored cataphracts and skilled archers.

The Southern Empire shares a border with the Aserai and Khuzaits, as well as the two other splinter states resulting from the splitting of the Calradic Empire. This empire is ruled by Rhagaea Pethros, the widow of Emperor Arenicos, who claims the throne for her daughter Ira, the only child of the late emperor. 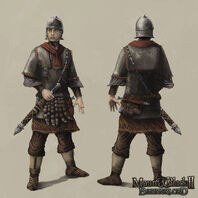 Map of the Southern Empire as of the release of Early Access; Created by Vesper