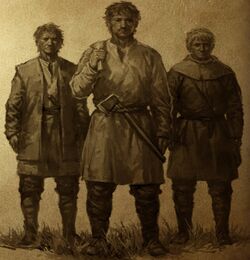 Recruitment of troops may be accomplished through several ways in the Mount&Blade series.

Each method has a variety of advantages and drawbacks which should be considered when planning your force composition.

Additionally, several permanent companions can be recruited from taverns.

The cheapest, most consistent, and easiest method is to recruit cultural recruits from villages. The culture of the recruit is determined by which faction or nation held the village in the initial stage of the game. Recruiting cultural recruits can be achieved by visiting a village and selecting 'Recruit volunteers', which come at ten Denars each. You can recruit from any village whose faction you are not at war with and the village is at least indifferent toward you, although if a village has sufficiently high relation with you, you can still recruit from them even if you are at war with that village's faction.

Normally recruits are base units: Tribesmen or Recruits. However, if the village has a high enough positive relationship with the player, higher tier units may become available; this is, however, not necessarily beneficial, as it can limit the player to an unwanted tier path (such as getting Khergit Lancers when wanting Khergit Horse Archers). For every 10 relation, you can recruit one higher tier of troops. The chance to get higher tiers is 10%.

As they gain experience through training or battle, they can be upgraded. Upgrading units makes them stronger, and at some points, when the player is given the option of two different upgrades, can determine the path along the tier tree the unit takes. These points of diversity occur when there are different classes of unit to be had at the same tier in the upgrade tree. These normally fall where a unit can become infantry, cavalry, or archery specific. Aside from allowing units to become specialized, they also become more powerful and skilled within their chosen specialization. Each time a unit is upgraded, a fee must be paid (Warband only) and their weekly wage increases. The cost of the next upgrade also doubles with each tier, starting with ten denars for a cultural recruit. One exception to this is when upgrading recruited looters to bandit level and bandits to cultural recruit level.

The top tier units of local recruits have higher stats and lower wages than their mercenary counterparts.

Hiring mercenaries from taverns is a fast, but expensive way to bulk up your forces with more formidable troops. However, as they are mercenaries, their promotion trees are different, and they often will cost much more than practical for a lower level player.

Mercenaries are freelance warriors. They require higher wages, but their first tier unit is better than base cultural recruits. They can also be upgraded faster. You can upgrade your Watchmen into Hired Blades very quickly. Bands of mercenaries are randomly generated from all levels of their tier tree in groups of 3-7 (2-9 in With Fire & Sword), in the taverns of towns. They require a sum of money, dependent on the number of men and their tier level, before they will join your party. If the player is unable to pay this 'recruitment fee' they may still recruit a fraction of the men with the relevant fraction of the total. The player cannot, however, choose the number desired; they may only choose to take the maximum that can be afforded.

Mercenaries are powerful when compared to lower-tier local recruits, but at higher tiers, they generally become weaker and significantly more expensive than their counterpart units within the cultural tiers. Mercenaries are also not affected by cultural morale modifiers such as positive modifiers for being within home territory and negative modifiers for having to fight against their own faction.

With Fire & Sword expands on the ways that mercenaries can be hired. In addition to tavern mercenaries, there are five Mercenary Camps scattered across the map, one associated with each nation. From a mercenary camp one can hire infantry, marksmen or cavalry mercenary units with the characteristics of the nation that the camp is near. One can also upgrade existing mercenaries by giving them better armor or weapons, but only those hired in the same camp can be upgraded. There are two other types of mercenaries that can be hired from fortresses or towns: national mercenaries can be hired after joining the nation, from a fortress or town with a Mercenary Captain, and regional mercenaries can only be hired from certain fortresses and towns on the map, and that place must have an Infantry Commander.

Party members can also be recruited from captured prisoners, either your own or the enemies'. These methods are the only way to obtain certain units such as bandits and peasant women. While this method is unreliable as a way to keep your forces maintained, it is, however, useful in a number of situations.

Having defeated a party which held prisoners, you are given the option of recruiting them into your party at the same time as you choose prisoners of your own from the wounded ranks of your enemies (the option is given even if there are no enemy prisoners to take). Doing so costs one week's wage in advance per unit, and is therefore much cheaper than training them from recruit level. Doing so is advantageous if you have lost men in extended campaigns and are unable to return and train up new recruits. Prisoner units can also be recruited from the dungeons of captured castles and towns in a similar fashion, where it is especially useful for bolstering the garrison with units that would otherwise come from your own ranks, as well as replenishing any units lost in the siege. You can only do this directly after capturing a town or castle; leaving the screen releases previous prisoners and any remaining prisoners from the battle are then stored in the fiefs’ dungeons.

You can take prisoners from dungeons of towns/castles you personally control, but cannot directly recruit them. They are added to your prisoner ranks and can be recruited from there (see below).

Arguably, the least efficient method of gaining troops is by recruiting them from your personal prisoners. This can be achieved opening the camp menu, and taking the action "Recruit from Prisoners".

Doing this has some advantages. Notably it is the only method of obtaining party members free of charge (aside from specific Companions), although weekly wages are still required. It may also be of use to bolster your forces if you have recently suffered heavy losses.

The disadvantages are significant. For each prisoner that is accepted into the party, you lose 3 party morale. Conscripted prisoners are likely to take advantage of their new freedom and escape; more than 50% of the new units escape during the first night after recruitment. You can get around this by putting them into a garrison the first night. They will not escape and you can take them into your army the next day (you do still lose morale, however). You can also prevent the conscripts escaping if you level them up in combat before nightfall. The prices obtainable by selling the prisoners will cover the cost of recruiting and training a new unit to the same level along a path of your choice, so selling the prisoners and training new recruits is more effective and allows you to build an army more suited to your combat tactics.

Deciding which to choose[]