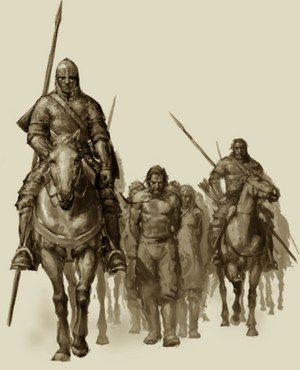 You can take prisoners at the end of most battles or sieges. Some fights do not allow the option, such as freeing a village from bandits.

You can only capture the enemies who have been knocked unconscious through the use of blunt weapons (horse charging is also blunt damage). Very rarely, sharp weapons may result in wounding, due to reasons unknown (possibly the surgery skill on the opposite side). Once you have taken prisoners, you may recruit them to your party, ransom them to Ransom Brokers (found in taverns in towns), or garrison them in a town or city. Money from ransoms can vary, depending how big the army was, if you captured a noble, or how good it is if it's a soldier (in classic Mount&Blade, all soldiers are worth 50 denars).

In With Fire & Sword, sending your troops into battle without you will very often result in wounding enemy troops, which can be useful if on a quest to capture enemy soldiers.

Your prisoner management skill governs how many prisoners you can take at a time: 5 for every point. The skill's base attribute is charisma.

Prisoners are considered party members for the sake of calculating speed, thus the amount and speed of prisoners can result in increasing or decreasing Party Speed. You may want to avoid dragging around low value infantry, while keeping mounted prisoners around for a bit longer.

It should be noted that keeping prisoners in castles or towns will result in them very, very gradually decrease in numbers, and eventually be gone altogether. This may be because they have fled or died.

Lords or kings can be taken prisoner after their army is defeated if they fail to escape from battle (70% chance to escape in Warband, 80% in With Fire & Sword). Every 24 hours, there is a 5% chance that the kingdom from which they come will offer denars/thalers/peningas to get the prisoner released; refusing this will result in loss of honor, but will prevent them from raising a new army for as long as they are held captive.

You can still capture a lord without using the prisoner management skill. If your prisoner capacity is reached, the lord will still be captured, possibly overfilling your max capacity (e.g. 6/5). However, if you remove a normal prisoner, you will not be able to go back over once the party is full.

If you keep the captive nobles as your prisoners while you travel, you will notice that they gain the + symbol next to their name, like they have leveled up. However, there is no way to upgrade their skills. 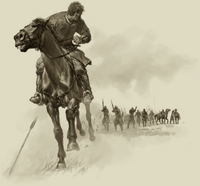 You can rescue captured lords of a neutral or friendly kingdom from your enemies in two ways. The first is to simply defeat the lord that took them prisoner in battle so long as he has not put them into a dungeon yet, this will automatically free the captured lord and you will gain +7 relation with them and +2 honor.

In Warband, a second option is to sneak into a castle or town where a lord is being held captive, knocking out the prison guard (this can be very difficult in towns where you may find yourself surrounded by up to 4 high-tier troops, in a confined space, wielding only robes and a quarterstaff) then entering the prison and telling the captured lord that you're there to rescue him. This may become easier by bribing a village belonging to that town/castle to start a fire. The fire will start in one hour or at midnight by your choice, and most of the guards will be gone while fighting off the guards with the prisoner.

It is also possible to rescue lords from a castle or town if they are held by a faction that is neutral to you. This is more attractive than attempting to sneak past the guards as it allows you to retain your normal adventuring equipment, which makes fighting a half dozen guard units quite a bit easier. It raises your relationship by 7 with the rescued lord as well as increasing your relation by 2 points with his home faction. There is also honor associated with ending their incarceration. There are no negative effects with the ruling lord or faction. In addition, if the captive lord has relatives, you can speak to the relative to receive a quest to rescue the captive lord, further increasing your relationship with him (by 1 when you accept the quest and by 8 when you successfully complete it), monetary, and experience gains. In total, this is one of the most effective ways to increase honor and relations as an unfactioned lord, and goes a long way towards building a future kingdom. Since troops are completely unnecessary it is best to just use a bare bones party of heroes and free all the lords possible. This is excluding the possibility of running into a roving hostile band.

Note that if the faction of the quest giver and the faction that captured the lord in question make peace (before the player could finish this quest) then all the Lords (not the troops) of both of these factions will be automatically released, making it impossible to finish this mission since it will be cancelled.

Once you have gotten the lord out of prison (it is a good idea to tell him to fight together with you, then order him to hold his ground in a corner out of sight) you have to defeat all the troops in the town or castle, without letting the lord get knocked unconscious; this can be very tricky when there are a lot of archers around. If a lord is knocked unconscious you will have failed the rescue, and the game will tell you that he had to be left behind.

You cannot attempt a prison break in the same castle/town more than once every day, as the guards will instantly recognize you. 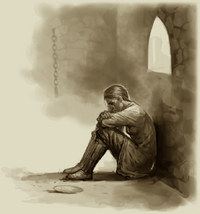 After capturing a castle or town, you may find ladies who failed to escape. In Warband, you can talk to them and let them go free (+1 relationship), or hold them prisoner for ransom (loss of relationship and honor, profit if a deal is offered).

You may attempt to recruit prisoners into your party through the Camp menu once every 24 hours.

This may allow you to acquire a specific unit without having to train them yourself, or may give you a quick boost to your troop numbers. However, doing so comes at a cost to Morale of -3 for every prisoner that accepts your offer. There is also a high chance that freshly recruited prisoners will desert your party within the following day, although this can easily be prevented by putting them into a garrison.

The chance of prisoners accepting the deal is based on your persuasion skill. 0 persuasion will have a success rate of 40%, every point increases the rate by 4% up to 80% at skill level 10.

When recruiting prisoners, the choice to join your party is not made by individual units, but rather a troop type. In other words, if you have 3 Nord Recruits as prisoners, you will either get 0 or 3 of them.

In Viking Conquest, it is also possible to capture prisoners, but the amount of prisoners you can have depends solely on the size of the party instead of the skill prisoner management.