The overland map is the aerial view of the whole game territory.

In the first two games of the series, this is the land of Calradia, in With Fire & Sword, it is Eastern Europe, and in Viking Conquest it is the Northlands.

On the overland map, you can see your party represented as a small walking man if you do not have a horse, or a mounted man if you are riding a horse. If you are a noble or vassal, your figure will also be carrying your banner. You may also see the representation of any other party within your line of sight as governed by your Spotting skill.

The Towns, Castles, Villages, and (in With Fire & Sword) Fortresses owned by each faction or nation will always be visible. The current owner will be displayed by the color of the locations' title. In the case of fortifications, you may also be able to tell the exact owning lord by their banner flying over the location.

Other objects of interest you may find (but not in every game of the series) are Training Fields, Bandit Camps, and Mercenary Camps which all serve a specific purpose.

From the overland map you can move your party to any other accessible point on the map.

Clicking on another map object moves your party in pursuit and will open dialog with them as soon as your party can makes contact with them.

Dialogs with labeled objects, such as towns, will present you with the options available to you from that object, which may include Trade, Sieges, or Recruitment. Dialogs with enemy troops usually presents an opportunity to surrender or bribe them, but often results in combat. Dialogs with friendly troops provides opportunities to gather information about factional leaders and collect support from allies.

The terrain depicted on the overland map can have an effect on Party Speed as well as dictate the selection of Battlefields. If you are amidst trees or rivers when you engage in combat, these may also be present on the battlefield. The terrain can vary from level plains to treacherously mountainous, which can have a big impact on the effectiveness of your troops like cavalry and archers.

Impassible mountain ranges and rivers may allow you to trap an enemy you are pursuing, although they can also trap you if you aren't careful.

Depending on your current level in Tracking, you can detect the tracks of other troop movements and identify various attributes about them (like numbers and composition). This will permit you to make informed decisions about potential enemies beyond your line of sight. 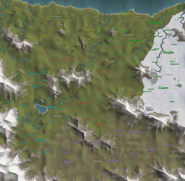 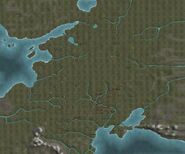