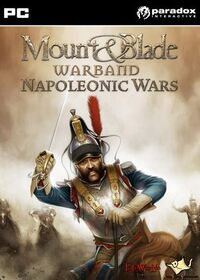 Napoleonic Wars is a multiplayer-only downloadable content (DLC) expansion pack for Mount&Blade: Warband featuring the last years of the Napoleonic Wars. It features historical battles from the Napoleonic era of up to 250 players with over 220 unique units, such as the invasion of Russia and the battle of Waterloo in one of the five available factions.

Napoleonic Wars was released April 19th 2012 and was developed by Flying Squirrel Entertainment.

Retrieved from "https://mountandblade.fandom.com/wiki/Napoleonic_Wars?oldid=56641"
Community content is available under CC-BY-SA unless otherwise noted.