View source
watch 02:52
Roblox: DeepWoken - The Loop
Do you like this video?
Play Sound

Mount&Blade II: Bannerlord is a sandbox action-RPG strategy and the latest installment in the Mount&Blade series by TaleWorlds, acting as a prequel to Mount&Blade: Warband.

The game released in Early Access on Monday 30th March, 2020. Despite being quite polished and featuring numerous implemented changes and improvements over Warband, it is still not feature complete and remains an Early Access title.

The events of Bannerlord take place 200 years before the start of Warband, witnessing the latter years of the Calradic Empire and the rise of the kingdoms from which Swadians, Rhodoks, Nords, Vaegirs, Khergits and Sarranids all claim descent.

There are a number of quests in the game which allow the player to shape the storyline as well.

The kingdoms present in Bannerlord are ancestral to those of Warband and have some of their descendant kingdoms' traits. Each kingdom has several clans who rule and run their own towns and villages, and have their own castles. Additionally, there are lesser, minor factions akin to bandits and mercenaries for the player to interact with during their exploration of Imperial Calradia.

Multiplayer is a feature that returns to Mount&Blade II: Bannerlord. It involves a plethora of both old and new features, some which have caused controversy. The game sees the return of its Custom Server List and classic game modes such as Team Deathmatch and Siege. Newer features include a new party system, a Quick Play function for automatically finding and joining a server, brand new game modes such as Captain and Skirmish, a class system and an armoury which allows the player to see what is each class contains.

Taleworlds claims there will be "many exciting and highly requested new features" and that it will include "up-close and personal medieval combat on a huge scale, bigger, bloodier and more intense than ever before". They affirmed that they will implement what the fans want in Mount&Blade II: Bannerlord.

Taleworlds will also be incorporating aspects from mods, such as the Diplomacy mod, to enhance gameplay.

Companions are now generated based on a suffix rather than specific characters. Additionally, they no longer have to be balanced against each others' personalities. Particularly competent companions can be tasked to do quests on your behalf or formed into their own parties to operate independently.

Gameplay related features have been improved with a new inventory interface and better artificial intelligence. The siege system is also being improved based on player feedback, with additional tactics made available for sieges. Each of the six factions will have its own Board Games that will be playable. There are also various other changed Concepts.

Sieges are much more complex

Unlike its predecessor, Bannerlord strives to create a better living atmosphere within its Towns and Villages. Villages generally see more activity, with improved AI pathfinding to give the appearance of NPCs looking less like AI. Even teens and children can be seen among the adults, and they use different base models instead of being scaled down adults, as in Viking Conquest. Animals, such as chickens can also be seen wandering about. Town scenes also see more activity, with much bigger towns than in earlier titles. A much wider variety of structures and styles are on display. Taverns see a much improved ambiance, with NPCs actively drinking and conversing with one another, as well as walking around. Musicians will also play music in connection with the town's culture.

When Early Access released, many Towns, Castles and Villages are missing scenes, including Taverns, Throne Rooms and Arenas. Taleworlds has stated that over time, this will be rectified, with each Town, Castle and Village and buildings within such will have their own unique scenes.[1]

Clothing has also been changed, with the addition of a separate slot for shoulder/back armor (provides additional arm and body armor) as well as horse armor separate from horse types. Bannerlord also introduces the concept of a separate 'Civilian' outfit, restricting the ability to wear combat gear inside of major settlements, but also providing a separate loadout to customize for these scenarios.

Character customization interface for exchanging armor. Note the horse has separate armor and many new armor pieces are included.

Weapon behavior has been updated to a more physics-based approach, using the physical properties of the weapon to calculate stats like speed and damage. The main physical properties of a weapon are its length, mass, and distribution of weight. From these properties, the weapon's swing and thrust speeds are calculated using a simplified model, based on an article written by George Turner.[2][3] This new system replaces the old Warband method of calculating the speed bonus.

Similar to Warband, damage-type is separated into three categories, blunt, pierce, and cut, with blunt being the most useful against armor and cutting being the least useful. As before, maces confer an inherent bonus in the ability to disrupt the stance of the target if successfully struck. Some polearms, such as the Bill can sometimes strike enemies who parry with a weapon (dependent on the exact position of the two fighters). However, crushing through a shield block requires a specific perk from character skills; It is no longer inherent to certain weapons.

Weapon crafting is a new feature. As the player crafts new weapons and smelts down ones they find, they have a chance to discover unique parts that can then be applied to new weapons, changing their statistics and appearance. As an example, sword parts that can be discovered are blades, cross-guards, hilts and pommels.[1] This process requires resources which can be expensive to purchase, but smelting and refining can be leveraged to gain the needed materials from loot the player finds.

The game's graphics have been significantly improved from its predecessor, having better shading and higher detail models. The character animations are created utilizing motion capture technology, and the facial animations will also be updated to improve upon the portrayal of emotions.

The game engine has global illumination.[4]

The map of Calradia has been expanded to the south and east. Many towns and villages from Warband return in Bannerlord, some with slightly different names to represent how location names and language in general changes over time.

Looking south from the eastern half of the Southern Empire

Sieges are now better represented on the overland map

As with the previous games of the series, Bannerlord supports mods. TaleWorlds stated that modding was "a primary consideration when developing Bannerlord".

Various modding tools will be released alongside Bannerlord such as the scene, mesh, material, skeleton, replay, particle, atmosphere, cloth, and path editors as well as the model, animation, and resource viewers. A runtime performance tool will also be available.

Full Modding Support is said to be excluded from the Early Access period of Bannerlord, with tools set to be released with the full release of the game. [5] 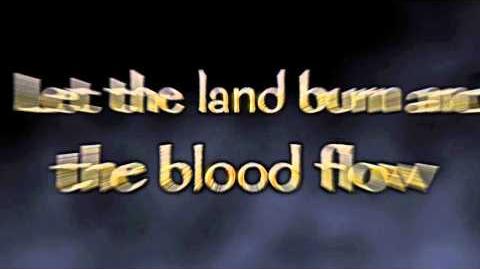 TaleWorlds Entertainment attended E3 2016 and on 12 June 2016, as part of the PC Gaming Show, showed off siege gameplay.[8][9][10] The following year TaleWorlds Entertainment attended E3 2017 where hands-on demonstrations of Bannerlord were offered to press.[11] The new Sergeant game mode, where the player leads a single company of soldiers, was showed off.[12]

The development team of Bannerlord comprises of 60 people, as of August 2017.[13] There are five developers in the design team, with two of them being narrative designers.[13] Armagan Yavuz is the lead game designer as well as game director at TaleWorlds Entertainment.[14] Steve Negus is one of the designers.[15] There are 25 artists working across different tasks like concept art, modeling, user interface, and motion capture.[13] The team includes Özgür Saral as the lead artist[16], as well as Fatma Öçba[17], Gökalp Doğan[18], and Ümit Singil.[19] Twelve people responsible for gameplay-related programming such as AI, combat, and multiplayer.[13] This team includes Cem Çimenbiçer as lead programmer[20] as well as Koray Kıyakoğlu[21] and Korneel Guns.[22] Eight programmers are responsible for Bannerlord's game engine, including the editor, performance, cloth physics, and console porting.[13] This team includes Murat Türe as the lead programmer[23] as well as Gökhan Uras.[24] There are 5 programmers working on the campaign itself, including missions, sandbox mechanics, and the user interface.[13] Berat Üstündağ is the lead programmer of the campaign team.[25] Lastly, there are five quality assurance developers.[13] Meriç Neşeli is the lead of the quality assurance team.[26]

The development has continued up until the present. An early access release date had been announced for March 31st, 2020. However, due to the coronavirus pandemic, the date was brought a day earlier, March 30th 10am UTC, with an additional 10% discount for anyone who owned a previous Mount&Blade title on select digital stores.[27] The game was expected to be in Early Access "for around a year" according to the Bannerlord early access description on Steam. Currently it has been in Early Access for closer to 2 years.

As of e1.6.2, major patches can and will make older saves unplayable, so turning on manual updates might be advisable, especially to players of the singleplayer campaign.

Portions of content, such as tavern keeper dialogue, as well as certain options in dialogue with clan heroes and local notables have yet to be implemented. Many scenes in-game, such as battles, sieges and other miscellaneous encounters have yet to be added. Numerous quests are also still in development. The character skill perks aren't all fully implemented, but are nearing completion and those that aren't are noted in-game. Occasional bugs, even game crashes aren't unheard of, but the game is reliably stable and fairly well-optimized; Very playable. 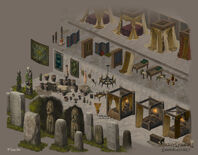 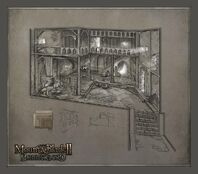 Battanians vs imperials in a bloody siege.

The Empire and the Vlandians in a battle.