Mount&Blade: With Fire & Sword is the second sequel to Mount&Blade, released by TaleWorlds Entertainment on the 4th of May 2011 in both North America and Europe.

With Fire & Sword is based on the historical fiction novel With Fire and Sword by Polish author Henryk Sienkiewicz and set in the 17th century Polish-Lithuanian Commonwealth.

Because of its advanced timeline, many things have changed from the past games.

"In the long grass man hunted man, like wolves or antelopes. All might hunt who wished. The outlaw sought refuge in the wild steppes, the shepherd completely armed, guarded his flocks, the knight- errant sought adventures, robbers sought plunder, the Cossack sought the Tatar, and the Tatar sought the Cossack."
- from the novel With Fire and Sword.

With Fire & Sword is set in the war-torn lands of 17th Century Eastern Europe. Join the fight for freedom, domination, or riches as five nations battle for control over their destinies.

The Kingdom of Sweden[]

Wealthy and powerful, the Kingdom of Sweden patiently waits to conquer the losing side of the Russian Polish conflict with an army of dreaded dragoons and musketeers. Sweden's army resembles contemporary Western European armies, with many gunpowder units such as the Swedish Reiter and the Lifeguard. In comparison with its peers, Sweden's emphasis on gunpowder weaponry makes it one of the more original factions of With Fire & Sword.

The Cossack Hetmanate is a Ukrainian state comprising wild-spirited independent fighters led by Hetman Bogdan Hmelnitski. With few armored units to speak of, the Hetmanate relies on an army of accurate musketeers, light insurgents and light Djura cavalry.

The Cossacks fight against Poland for their freedom. Cossack leader Hetman Bogdan Hmelnitski is forced to seek help from Russia in order to combat the Polish threat. Together the Cossack Hetmanate and Tsardom of Moscow march on the Polish Republic.

Born again in this new age of fire and sword, Russia sees itself under a powerful dynasty of Tsars bent on reclaiming land lost to the Polish Republic. The Muscovite Tsardom is truly a force to be reckoned with as it has a vast army of well equipped troops.

Russia boasts a large assortment of troops, reflected in the large assortment of marksmen (Muscovite marksmen include the simple Marksmen, the militia Posad Marksmen, and the elite New Order Marksmen), though it boasts quite good cavalry such as the Noble Guard. All Russian marksmen (Save for the Posad Marksman) deploy the two-handed poleaxe, a heavy weapon with a bonus against shields, giving even marksmen a fair chance against enemy infantry, while Moscow spearmen use a medium between the pike and the sword.

This faction most closely resembles the Kingdom of Vaegirs in the previous Mount&Blade games.

A kingdom caught between shifting alliances, the Khanate has been shielded from both the Tsardom of Moscow and the Polish Republic, but soon may find itself vulnerable and desperate. The Crimean Khanate may be forced to betray the Cossack Hetmanate and take its lightning fast army of mounted bowmen elsewhere.

Crimean cavalry cost less to maintain than any other nation's, and the Khanate boasts a large assortment of cavalry, ranging from the numerous Bajrak, mounted archer Jasaqs to the heavily armored Asak-bey, Circassian, and the powerful Nokhor. The light Kapikulu archer and the inaccurate-but-armored Seymen are the only native infantry the Crimean Khanate fields, but it has access to elite infantry on loan from the Ottoman Empire (modern Turkey) including Janissaries (elite musketeers), and Azaps (elite light infantry).

Founding Your Own Kingdom[]

There are several ways to start a kingdom for yourself and they are similar to the ones in Mount&Blade: Warband, although you will not be able to name your own kingdom.

One way is to become a member of an already existing faction and capturing a castle or a town which you will not be granted by the faction leader. When this happens you can choose to renounce your current oath and leave your faction. This will result in your new faction becoming a rebel faction for that faction.

When you have become a rebel for a faction it is a good idea to find the claimant for that faction and proceed to persuade the lords of the original faction to join yours instead. This way works exactly the same as it does in Warband. However, this will not make you king/queen of the new kingdom. Instead you will become the Marshall and the claimant will become the new faction leader. You will have major attacks on your kingdom, which may be what makes the game fun.

Another way to become a monarch is to start either The Deluge or the False Dmitry quests. In the middle of the Deluge quest, Colonel Zagloba will ask the player to become king or he'll start a rebellion against King Jan Kasimir. If you choose to become king, then The Deluge in the quest menu is completed and The Final Border quest replaces it. The player also becomes the Polish Republic's permanent marshall (even if they hold an election for it). The end point of the both quests gives the player the task to conquer Eastern Europe as the final quest.

"Every man is a lord for himself in our Commonwealth, if he has a sabre in his hand and can gather any kind of party."
- Andrei Kmita, from The Deluge.

The game is similar to its predecessors, and involves quests, earning trust, and gathering an army of followers. Unlike the original games, which are open-ended in nature, With Fire & Sword offers main questlines for the Cossack, Polish, and Muscovite factions.

Perhaps the biggest change from the previous games is the addition of firearms, which are consistent for the historical time period in which With Fire & Sword is set. Firearms deal heavy damage, but take a long time to reload, aren't very accurate, and have more limited ammunition than archery, meaning sword and bow are not yet obsolete. Grenades are also available and can be used to deal damage to groups of clustered enemies, but they do not refill. This technology replaces throwing weapons from previous games, so that now the "Power Throw" skill is replaced with "Grenade Throwing."

Warfare techniques are altered greatly by firearms and grenades, and players might find post-battle casualties much heavier than in the original games; indeed, the player himself is at far greater risk of a sudden death due to high-damage muskets or other firearms. Capturing of castles has become more difficult to achieve by force, so the game offers new siege options, such as bribing a guard, poisoning the water supply, or blowing a hole in the wall to provide an advantage based on the player's tactics skill.

Another new option is the choice to build a 'wagon fort' fort from the camp menu. A wagon fort is a triangle-shaped barricade which can be jumped over by horses (although the AI will not do this) but forces infantry to go around it.

Troop recruitment also has a number of changes from the original games. Factional troops do not have tiered upgrade trees; many troops in With Fire & Sword only upgrade once to a "veteran" version. In villages, you can only recruit weak militia, who provide little in the way of combat ability. Troops recruited from Mercenary Camps are stronger and have more upgrade potential; the player can also customize mercenaries' equipment by visiting the camps. The most effective soldiers are recruited from Commanders in fortifications your faction controls. Unlike in the original Mount&Blade and Warband, when a vassal of, say, Swadia could feature an army of high-level Nord or Rhodok troops, the best troops for each faction in With Fire & Sword only become available once you have allied with that faction and get access to commanders.

Walking around the towns, villages and fortresses will reveal a far larger game environment (which could cause lag on lower-end PCs). In towns and fortresses, players have a number of new options available through the new Town Center.

Marriage, a feature available in Warband, is no longer available in With Fire & Sword. Players are also unable to rename their own faction.

Militia: the weakest troops which can be recruited from villages or Commanders.

Infantry: regular infantry troops which can only be recruited from Infantry Commanders.

Cavalry: regular cavalry troops which can only be recruited from Cavalry Commanders.

Guards: elite troops which can only be recruited from a Personal Guard Commander and/or Heavy Cavalry Commander.

Special soldiers: special troops which can only be recruited in a few fortifications. The commanders vary.

Tavern mercenaries: Mercenaries that can be recruited from taverns. They can best militia but not regulars.

Camp mercenaries: Mercenaries recruited from mercenary camps. Their stats are always lower than similar faction troops but their equipment can be customized.

*Commanders are found in castles/cities by going to the option "Go to the town center". You must be a lord/vassal/mercenary of that faction to access the commanders. There will often be rumours about commanders, which can suggest what troops are available to be recruited. You must come back to the same commander four days later to pick up your troops by clicking "I want to recruit some men."

As with the first Mount&Blade games, there are numerous Heroes that you can employ in your party.

All Mount&Blade games can also be downloaded as a "try before you buy" trial version from TaleWorlds' website for free.

The trial version allows you to play the single-player game until you reach level 8 (or until the day 30) at which time it automatically saves your character and quits. After purchasing and entering a serial key, the limit will be unlocked and you may resume playing with the same character and access the multi-player servers. You will not need to download the game again. 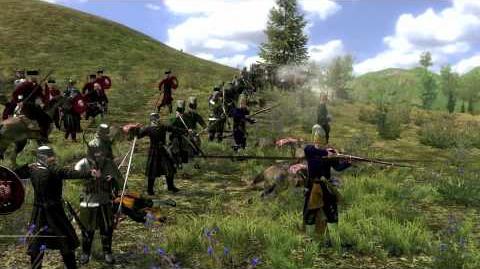