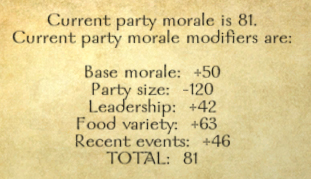 Morale represents the ability and willingness of the troops in a party to summon up the endurance, bravery, and discipline they need to face the stresses of battle and the march. It is not the same thing as the troops' happiness. Elite troops may grumble and whine about the hardships of campaigning -- but then stand together as one when the arrows start to fly. On the other hand, a commander who gives his men everything they want may find that they grow soft, and waiver before the enemy's charge.

Morale's greatest impact is on a party's behavior in battle, determining how aggressively troops engage the enemy, and how likely they are to break and run if they perceive the tide of battle turning against them. Morale also affects a party's march speed, as a less motivated party will move more slowly, as the men are not pushing themselves to their physical limit, and pause more frequently, as it waits for stragglers to catch up. Finally, a party with very low morale will start to suffer desertions.

Some factors that affect morale are intuitive. For example, a charismatic commander with a reputation for winning battles can infuse his or her men with a sense of confidence. Leaders who give their men well ample and varied supplies of food, and pay them on time, demonstrate that they care about their troops' welfare, and are less likely to lead them into disaster.

Other factors are less intuitive -- particularly those related to a party's sense of group cohesion. In a small tight-knit party, for example, men will often fight hard against daunting odds to avoid showing cowardice before their comrades-in-arms. A large party on the other hand may see its cohesion strained, as the commander has less time to supervise the men, listen to their grievances, and resolve their disputes. Frequent battles will strengthen the bonds between men, while long periods without combat will see the troops become bored and quarrelsome.

The morale report is accessible by hitting the 'reports' button and will give the player a sense of the factors affecting their troops' morale.

The following is a table of ways to gain or lose morale. Normal troops and companions may be affected by different things.

The more troops you have in your party, the higher the morale penalty will be. Note that when removing party members, this penalty will decrease by 1 each, but a temporary 1 point penalty will be incurred to Recent Events. This means you are left with no immediate net change.

If enemy troops have lowered morale, caused by your forces outmatching them in combat, they will disengage and attempt to flee the battlefield. This is partially determined by the current hitpoints of the enemy troop relative to their current target, as well as whether the enemy as a whole are outnumbered or not. Enemies cannot start running away until at least 45 seconds after the battle has commenced. If the fleeing troops manage to reach the edge of the battlefield, they will disappear and will be recorded in the after action report as "Routed".

Routed enemies will attempt to escape into the nearest settlement once you've returned to the overland map after having fled the battle. If you manage to reengage them, they will usually be immediately captured without a fight, though one needs a very fast party as the small size of routed enemy groups makes them quite fast. If your party is small enough, there is a slight chance that they will decide to fight you.