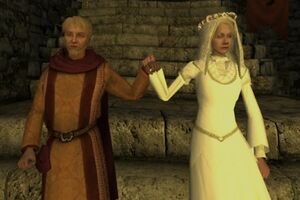 Marriage is a feature introduced in Warband that lets the player marry for love or for political gain. However, the feature was removed for With Fire & Sword.

Players may wish to marry into one of Calradia's noble families. Marriage is not necessary for a player to rise in power and stature, but it does provide players with an opportunity to improve their relation with lords (by helping you host a feast), help prevent vassals from defecting (by offering you a special quest that allows you to resolve a dispute between nobles in your faction), establish a claim to the throne, and provide you with a household inventory you can store items that is accessible through your spouse (this inventory is also used to stock supplies for feasts).

Marriage requirements will be different for males and females. A male character will usually need to pursue a traditional path of courtship. He should establish a reputation in Calradian aristocratic society, get on good terms with his bride's parents or guardians, and then woo the lady according to local custom. If a player grows impatient, he may attempt to take a shortcut – but there will be consequences in his relations with other lords.

A male character should keep in mind that other lords will be competing with him for the affections of the kingdom's ladies. Also, a lady's tastes are unpredictable, and a player may also find that the object of his love does not love him in return. Romance in Calradia, as elsewhere, does not always prosper. Of course, a player may resort to other, less gentlemanly means of winning a lady's heart, but again, that will have a serious impact on his reputation.

To get started on the path of courtship, a male player should try to get involved in the social life of the Calradian aristocracy, attending feasts and tournaments. Also, wandering troubadours and poets can serve as a useful repository of information on courtship, and keep the player up to date about the latest gossip.

Female characters can also marry – but they should keep in mind that Calradian society is very traditional, and as adventurers, they have chosen a very unconventional path for a woman. A female character may have to look for a while to find a lord who is open-minded enough to marry her.

On the bright side, a female character does not have to go through the elaborate rituals of courtship, and she also may gain more from a marriage than her male counterpart. For a woman adventurer, marriage can be a quick path to power and an unscrupulous character may be able to use her husband as a tool of her political ambitions.

The easiest way to meet your partner is during feasts, which can be entered freely if you're of noble birth. If, however, you come from a common background, you'll have to prove yourself either by winning the accompanying tournament or by having at least 200 renown.

The alternate way to meet a lady is to go through her family. By raising your relationship with her guardian (either her father or her brother) and asking to "cement the alliance to their house", you may be given permission to start courting his daughter/sister. If you manage to befriend him, he might bring it up himself by hinting she would be delighted if you paid her a visit.

You start courting a lady by declaring yourself her "most ardent admirer". You can court several ladies at the same time, and make your decision later on. You can also court a lady of a faction where you are not a vassal, although it may be difficult to visit her in times of war.

About 5 days after your last visit, you will receive a letter from her asking you to pay a visit. If you have permission from the family you can just walk up to the gate and go in. If not, you are smuggled in dressed as a scullery maid by one of the nurses. Once inside, you may discuss your future with the lady, dedicate a recent tourney victory, or recite poetry you picked up from the various wandering minstrels in the hopes of winning her heart.

There are many ways to gain her favor:

Once your relationship is high enough you may propose, and with the blessing of her family, you may then marry at the next feast held in the land. A minimum of 20 relation points are required to guarantee an accepted proposal, although it is possible (but less likely) for a lady to accept a proposal with a lower relationship. Chance for it is calculated with players persuasion and amount of relation points you are lacking (in other words, 20 minus your relation points). Failing persuasion has a penalty of losing 1 relation point. Sometimes she will have another admirer, and you will need to duel him for the claim.

Sometimes a lady's father won't accept the player as a suitor, so he will need to somehow persuade her father to give him her hand in marriage. He will also ask for a dowry that must be paid before the marriage can proceed. The couple can also choose to elope, making an enemy of any of her relatives. If the lady's father defects to another kingdom, the wedding will be called off, as you and the lady's father will now be enemies, though you can still elope.

You will learn from Wandering Poets that certain available ladies in the realm have particular tastes or aspirations that you will need to accommodate. They generally break down into five distinct groups; Conventional, Political, Moral, Combative and Romantic.

Courtship as a female character is very simple and direct:

If he accepts, talk to him during a feast to perform the marriage ceremony. If you can find the Lord on the field, he might say that gathering all of the lords together is a difficult task and suggest that you two marry in any hall. Then, you can find him later in any castle or large city, and he will ask to get married immediately.

If he declines your marriage proposal, increase your relationship and renown then try again. However note that certain lord personalities (such as upstanding and martial) will never marry a "wild and free woman" such as yourself.

This will automatically grant you vassalage in the faction that he is affiliated to, so watch out if you want to stay a freelancer!

The Wandering Poets you talk to about courtship will however, still treat you as if you were a male suitor and give you suggestions for female companions.