Marnid is one of the Heroes of Calradia and one of the two followers that can be recruited at level 1. He was a caravan trader from a foreign land before being raided by Khergits, and then by his own caravan guards.

If your party travels near Sargoth, Marnid will explain why he traded with the Nords, and states that the Nords, despite being warlike, are fond of trading, especially with flax.

As he lost his goods to Khergits, he dislikes Baheshtur, especially since the Khergit often and fondly speaks of raiding caravans and hopes to do so again in war. He also finds an enemy in Alayen, as after taking down one of Alayen's opponents the Vaegir nobleman criticized him for doing a knight's work, and Marnid resolves to next time let Alayen be injured. He does find an unusual friend in Borcha, however, trusting the rustler to have his back in battle even if he would not trust him with his purse.

When claiming your Right to rule, he will state how he wants a king/queen who ensures the traders and merchants get their fair share of denars which have been squandered away by the wealthy. This will infuriate Klethi, who relies on the wealth of nobility.

If elevated to lordship, Marnid will recruit whatever troops are available in his fiefs, regardless of nationality. 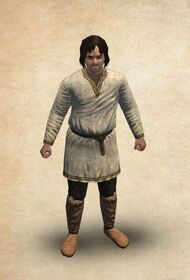 "A while back, I left Geroia with a caravan of goods. I was hoping to sell it all in Sargoth and make a hefty sum. But, what do you know... we were ambushed by a party of Khergit raiders who rode away with most of the horses and goods. And two days later, my own caravan guards ran away with the rest of what I had."

Retrieved from "https://mountandblade.fandom.com/wiki/Marnid?oldid=63525"
Community content is available under CC-BY-SA unless otherwise noted.