King Harlaus is the monarch of the Kingdom of Swadia. He starts as the lord of Praven with 1200 renown. He has no family other than his cousin's daughter, Lady Isolla of Suno. Harlaus wears Plate Armor and a Knightly Heater Shield, thus making him one of the strongest NPCs in the game. Even though he is old, he is a powerful warrior and at a high level.

He dislikes awarding fiefs or castles to anyone but himself, though this can change as the player's Renown increases.

King Harlaus was the first monarch added to the game.

There was a quest in version 0.202 of Mount&Blade that instructs you to kill King Harlaus, but he returns as the Undead King. It is unlikely that the developers, who have stated their intention to remove the pre-release story mythos from the traditional series, will ever reconcile the character of this Harlaus with that of the one in the main series.

Conversation with Harlaus after he has been resurrected went as such:

"You! I had not recognized you before... I remember now. You are that traitor who killed me in my sleep... You wretched demon! You disloyal dog! You dare to murder your king! I am your lord! Your master!"

"You are wrong undead king. I swore loyality to another lord."

"But you have failed... You can not kill a god you stupid mortal! I have returned to cast my holy anger on you and your kind. I will cleanse this world of your treason even if I have to cut down every living man woman and child."

"King Harlaus! Look at me! You are not a god, you are just some stubborn undead king and truth be told, I am fed up with you. So pack your worm infested bones, I am going to send you back to your darkness."

"Stop complaining for once and die will you!"

"This is not over! I will come back.... Yes, some necromancer somewhere sometime will resurrect me again... Do you hear me... I am going to reign again!"

"Not this time undead king. I will cut you to a thousand pieces and burn each one of them down. There will be nothing left from you to resurrect." 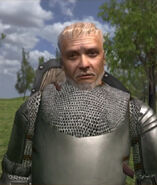 Harlaus in the Mount&Blade beta version 0.903.
Add a photo to this gallery

Retrieved from "https://mountandblade.fandom.com/wiki/King_Harlaus?oldid=60800"
Community content is available under CC-BY-SA unless otherwise noted.