The Khuzait Khanate is a kingdom in Mount&Blade II: Bannerlord. It is ruled by Monchug Khan, and occupies the eastern grasslands and steppes outside of the continent of Calradia.

Khuzait peoples were once nomadic tribes who roamed the east borders of the Calradic Empire, until threats from further to the east forced them to band together as a Khanate under Urkhun the Khuzait. This Khanate moved into, and conquered, the poorly defended eastern lands of the Empire. Eventually, these nomadic tribes became settled in the towns and villages they had taken.

Light cavalry warfare- lancers, and especially the way of the mounted archer- is the military specialty of the Khuzaits. On the overworld map, Khuzait cavalry armies move 10% faster.

In Mount & Blade: Warband, which is set 200 years after the events of Bannerlord, the Khuzait Khanate has been usurped from within by a minor clan, the Khergits. By this point, the Khanate has conquered most of the territory which formerly belonged to the Empire and Sturgians.

A century before the start of Bannerlord, the Calradic Empire extended all the way to the border of the Great Grass Sea. The steppe tribes on the border, which included the Khuzaits, Nachaghan, Arkits, Khergits, and Karakhuzaits, were disunited. The Empire was able to keep the tribes fighting among themselves by bribing chiefs and assassinating khans that were consolidating power.

However, two generations before the start of Bannerlord, steppe tribes from the far east pushed westward toward the Empire. Caught between a hammer and an anvil, the border tribes united in a confederacy under Urkhun the Khuzait. This confederation grew in power by conquering and raiding the most eastern extents of the Empire. Taxes and tariffs were levied on these conquered towns and lands. Eventually, the Confederacy became known as a Khanate.

Urkhun ruled the Khuzait Khanate with supreme authority, not allowing vassalized clans to raid or declare war without his approval. This settled and more conventional lifestyle did not sit well with some of the more unruly clans, such as the Karakhergits. After Urkhun's death, his descendants continued to rule. However, many clans felt they should be the ones to rule the Khanate.[2]

The nine-horsetail banner is the symbol of the Khuzait Khanate.

6 cities, 9 castles, 19 villages. The main goods: wool (the main producer), iron (control a quarter of all deposits), horses, there are deposits of silver.

Since Khuzait-based parties are able to rely so much on cavalry, they possess decent strategic mobility on the campaign map. However, extended incursions into enemy territory may deprive them of additional horses to carry their slower foot troops one way or another, slightly reducing mobility over time. As such, a Khuzait war party can advance quickly into desired position, but their retreat may be slower. This can be taken advantage of by opponents who engage the Khuzait mounted forces in rough terrain where their cavalry is unable to maneuver perfectly. Even so, there's normally little reason for Khuzait horsemen to dismount and fight on foot, as the steppe horse stock is well balanced for health and maneuverability, and the high riding skill of Khuzait horsemen enables them to use their mounts with reasonable effectiveness even in difficult terrain.

In simulated battles the sheer force of Khuzait cavalry should be more than a match to armies of other kingdoms, at least on open field. In unsuitable terrain and siege battles, as well as in real time battles where a player who is opposing Khuzait cavalry is able to hinder their mobility, the Khuzait parties can fare much worse than more balanced forces. Khuzait lancers and horse archers can still be sufficiently capable fighters in siege battles, so players do not need to rely on their infantry options for anything other than defending fiefs so long as they have access to required supply of riding horses. Players can also take advantage of the possibility of the seemingly stronger enemy garrison sallying out during a siege, reducing Khuzait ineffectiveness in taking over fiefs by engaging the garrison in open combat instead of siege battle.

The Karakhergit are a minor faction of the Khuzait Khanate.[2] 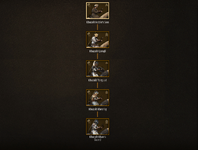