Warband
Katrin is one of the Heroes of Calradia. Initially, she has few combat skills; however, she can serve as a supporting hero quite well.

She is a former peddler, selling to armies in particular, and her Inventory Management of 7 supports the claim. When recruited, she tells the player that she had lost everything and, rather than starting over her business as she always did, she instead decided to sell all her wares to pursue other interests. However, her Inventory Management skill is totally useless to you because it's a Leader skill, and provides you with no benefit. Because so many of her points have been pre-invested in this skill, she is one of the least useful heroes until you develop her skills in more beneficial areas.

If you venture near the Swadian town of Uxkhal with her in your party, Katrin will tell you her story, and include the fact that Uxkhal is her hometown.

Katrin is also an extremely superstitious woman, disliking Firentis and Baheshtur because of this. In Firentis' case, she believes that as a kinslayer, he will bring misfortune to them all. In Baheshtur's case, she believes a thanksgiving he says following a battle will instead cause the spirits of their dead enemies to follow them and treats him as a heathen. Additionally, she will bolster the player's Right to rule via a palm reading, claiming that the player's "King's/Emperor's Line" is extremely long and that there is a prophecy associated with it.

She also gets along well with Bunduk as both of them are old Calradians who have seen a lot.

When given a fief, she will recruit whatever troops are available in her lands, regardless of nationality. This decision will also upset most Calradian nobles, as they dislike having a commoner hold fiefs. 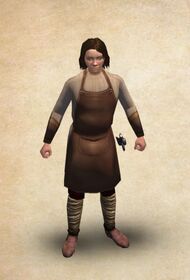 "Why, I managed to sell my wagon and pots, (lad/lass). For once I've got money to spend and I intend to make the best of it."

"For 30 years I followed the armies of this land, selling them victuals and drink, watching their games of dice and finding them girls, and nary a denar was left in my purse at the end."

"It's no kind of life, victualling the armies. You earn a bit here and a bit there as the soldiers spend their money, and then along comes one defeat and you have to start over, endebting [sic] yourself to buy a new wagon and new oxen. So I've decided to get out of the business, but army life is all I know."

Retrieved from "https://mountandblade.fandom.com/wiki/Katrin?oldid=62130"
Community content is available under CC-BY-SA unless otherwise noted.