The Karakhergit are a Khuzait minor faction that keeps to the old ways of the Khuzait (raiding, pillaging and small clans).[1]

The Karakhergit are a nomadic clan that has resisted all efforts by the centralizing Urkhunid khans to keep them in one place, give them farmlands and serfs, and force them to give over taxes and military levies. They are treated by the other clans with a combination of envy and contempt. They trade and sometimes even intermarry with their settled brethren, but they also do a limited amount of kidnapping for ransom and raiding of flocks, and scoff at those who would blame them for carrying on with the heroic old ways. 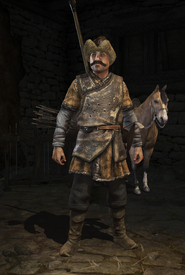