Jeremus is a foreign surgeon and one of the companions in Warband.

Jeremus is a foreigner who came to Calradia to offer his medical services. He used to be be a university student, but his criticism of Galerian, a famous doctor in many university, led to his expulsion and wander around Calradia to take jobs as a surgeon. One of his feats is treating the lord of Almerra Castle of dropsy, this rewarded Jeremus gold and a corpse to dissect. One day, he is treating a merchant's son but died of fevers due to the family not listening to Jeremus' advice, according to him. Because of this, the merchant accused Jerermus of witchcraft and attempt to get the surgeon arrested but the lord of the town is reluctant to arrest.

Jeremus soon reside in the tavern and find his employment tough as people suspicious of his work and he had barely enough money for his medicine. He met the player in the tavern and offer his services for free. If he retires, he will head home to share his medical findings to his colleagues and the fact that scribes are rare in Calradia.

Jeremus is not of noble birth, so granting him fiefs in Warband costs some relation points with most of the lords of Calradia. Lord Jeremus will then recruit whatever troops are available in his lands, regardless of nationality. 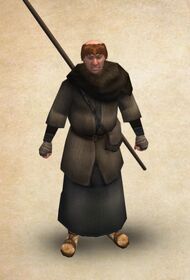