Horses are the important key in combat.They provide players with an advantage in both movement speed and attack speed. Each horse has its own stats so you should choose the one that fits your character. The speed of a horse can increase your attack. However, attacking on a horse while stationary will give you a damage penalty. There is an option to see how much of a penalty you received.

When outside of combat, riding a horse will generally increase your movement speed across the map unless your athletics skill is much higher than your riding skill. The horse's attributes also do not matter, meaning a Sumpter Horse has the same utility as a Charger. Adding horses to your inventory can also further improve your overland speed by reducing the speed penalty from heavy items in your inventory (see Party speed). 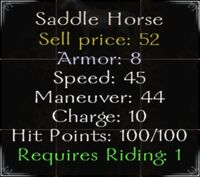 A variety of horses are available with a wide range of stats. Your best choice depends on your specific style or needs. Though not shown in the item or shop menus, some horses are larger than others, with heavier horses typically larger than lighter horses.

Classic Mount&Blade had a wide assortment of horses, while Warband added the Desert Horse, Sarranian War Horse, and Steppe Charger.

Many horses in With Fire & Sword have different stats. Due to the common use of firearms, more heavily armoured horses are less useful than they were in Warband.

Mounted troops are less common in the Viking Conquest DLC. There are eight mounts with only two different names. Mounts with saddles are called "common" internally, while those without are called "wild". The stats for all horses are identical, while wild ponies have lower maneuverability and cost.

Horses in the inventory will breed automatically and produce more horses over time. Verson e1.5.5

Like weapons and armor, horses also come with Modifiers. However, horse modifiers are more varied in what they change, with the "best" modifier being the one that provides boosts in the area you want your horse to excel in.