The following are tactical uses of Heroes from Mount&Blade and Warband that will allow one to optimize their party.

One first must be aware of which hero hates which other heroes, as these conflicts will decrease morale and make it harder to keep your chosen heroes from leaving the party. However, note that it is possible to keep a hero in your party along with someone they hate if you balance this animosity by also recruiting someone whom the prickly hero likes. Even without building in stability with this balancing technique, you can retain disgruntled heroes by avoiding doing anything else to get them angry and by keeping morale high. 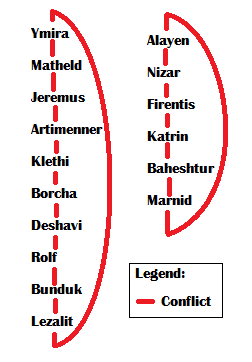 There are a few approaches to building a group that is stable over time.

There is only one lineup that includes 10 companions and is stable:

If you would like 9 companions, there are 10 possible lineups:

For a total of eight heroes you can focus on the two distinct loops of conflict, choosing one group of heroes from each loop, with two possible choices each.

* means they are Noble.

In addition to avoiding conflicts, each group of five has a pair of heroes who like each other (Deshavi and Klethi, Artimenner and Lezalit); the other three members of each group of five like someone in a group of three -- although the groups aren't "matched" (Jeremus likes Firentis and Ymira likes Alayen, who are from one group-of-three, while Bunduk likes Katrin, who is from another. Borcha and Matheld like Marnid and Nizar, respectively, but Rolf likes Baheshtur, who is in a different group).

Each Companion leans toward a specialization. Certain skills will contribute to the party as a whole. However, others are personal or a leader-only specialty, which would be good if they are a Vassal in your kingdom. When a Hero's health falls to 30%, or below, the name will be shown in red text and any of their skills that were aiding the party will not work until they heal back to above 30%. Those with healing abilities should be kept at the bottom of the party list to ensure that they see less battle and therefore are less likely to be wounded too badly to heal others. Common Specializations (note that very high level characters will be able to expand into another specialization):

Heavy Hitter (Strength based): Ironflesh, Power Strike, Power Draw. Uses heavy armor and 2 two-handed weapons plus bow and fights on foot (unless there are points for agility/horse archery left over). Alternatively variants include using a Crossbow instead of bow (to save skillpoints in Power Draw) or using a Shield+throwing weapons.

Weaponmaster (Agility based): Weapon Master, Shield and Riding or Athletics or Looting. Has just enough strength to enable decent armor and the better one-handed weapons. Fights on foot (Athletics & Looting builds), using a shield and one-handed weapons. A crossbow is also a good idea for the foot variants. The looter in particular should be left in the back with the archers, while the other two can be at the front as Infantry or Cavalry respectively.

Horse Archer (Agility based with Strength inclusions): Weapon Master, Riding, Horse Archery. Also needs decent power draw or power throw skill. A riding archer. Bow+Arrows or 2 throwing weapons stacks, 1 Hand weapon and Shield. The trickiest part is balancing between Strength (for the weapon requirements) and agility. If you use crossbows instead don't forget they can only use the lightest ones, which do not pack that much punch.

All Intelligence Heroes: One thing about them is that they have about twice the skillpoints as other builds, as each point of intelligence gives one extra skillpoint. What to do with them depends on your overall situation. Training is never a bad idea, as this allows you to quickly upgrade new units without need for combat. You can also make their skills overlap with other heroes, as often you have enough intelligence heroes. They are not very good fighters, so you should level them towards 10 strength, give them a Siege Crossbow and use them as archers. Or totally leave them out of combat and train them via trainer skill/shared experience only.

Pathfinder (Intelligence based): Pathfinding, Spotting, Tracking. Allows you to move a lot faster on the strategic map than without them and see enemies before they see you. Very important role for hunting bandits and certain quests. For best effect, combine them with other speed increasing measures.

Siege Tactician (Intelligence based): Engineering, Tactics, Training. If you need a castle taken or fief improved, he/she is your man/woman. Since their primary focus is on one Skill, they get the largest amount of spare Skillpoints, which also makes this a good choice for those heroes that already are high level.

Doctor (Intelligence based): Surgery, First Aid, Wound Treatment. These guys keep your people alive or get them back on their feet. Surgery greatly reduces the need to recruit and train new troops, while the other two get your heroes back on their feet faster.

Leader (Charisma based): As Charisma contains 2/3 Leader Skills, you have two options. Focus on trading only and invest overflowing skill points into other skills, making this hero a trader with wide (but shallow) skill set except for the trading skill. Or groom him/her to become your Vassal later, where Leadership and Prisoner Management are quite useful skills to have.

If you get sick of playing the nice-to-peasants honorable knight, you probably want to have "heroes" that don't object to the frequent razing of villages in your party. It's also highly profitable, so the incentive for being evil is there.

This chart consists only of like minded heroes should help pick your party: 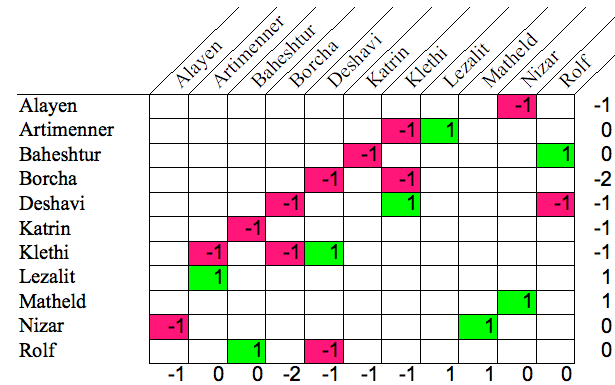 Depending on your morale management skills, a -1 dislike factor should be easily manageable.

The following is an example of a possible hero set up which will work well with early players. All these people will not have problems with each other, and most will willingly raid villages without protests. Additionally, many of them are nobles, allowing you to bestow fiefs upon them from your kingdom later in the game. Using them in your party for the early portion of the game makes them exceptionally powerful as they fight their own battles as your vassals.

Once you have begun your own kingdom, cycle these heroes out of your party and replace them with the others in the game, who are not nobles and thus make a better second-half party.

The following is an example of a possible hero set up which will work well in the second half of the game. While possible, it is not recommended that you begin with this team as its members are weaker and many have issues with raiding villages, a key source of early income.

Retrieved from "https://mountandblade.fandom.com/wiki/Hero_tactics?oldid=59943"
Community content is available under CC-BY-SA unless otherwise noted.