View source
watch 02:40
World of Warcraft: Dragonflight - The Loop
Do you like this video?
Play Sound 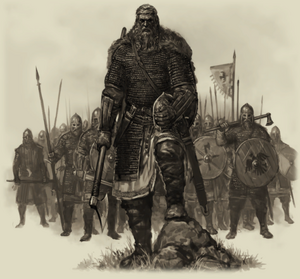 For other uses, see Factions.

There are five factions in Mount&Blade, while Warband added a sixth. They are constantly at war, trying to take over each other's territory and fiefs. They will never conquer a whole faction without the help of the player.

Each faction is distinguished by a different style of army; some have excellent infantry, others excellent archers or cavalry, or a combination of these units.

Each faction has a monarch and his vassals, as well as a claimant to the throne who waits for someone (the player) to champion their cause. The claimants can be found in random town keeps, and you can ask a traveler for their location for 30 denars. Claimants will never be found in a town belonging to the faction for which they are the claimant. For example, Prince Valdym the Bastard will never be found in a keep belonging to Kingdom of Vaegirs.

The player can join a faction, start a rebellion, or create their own faction. In the original game, a player who has created a faction cannot have lords at their service. A player-created faction is regarded as a rebel faction, and the player, as the sole lord, is forced to protect and expand the entire kingdom. This is not the case in Warband, as a player may assign heroes as vassals and convince rival lords to defect.

The factions present at the start of the game are listed below. For more information on each, go to their respective pages.

Creating your own Kingdom

Mount&Blade: Warband allows you to create your own Faction and give land to your heroes to make them your own vassals. Your faction color will be red. For more information, see the King of Calradia page.