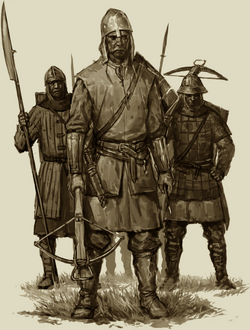 Deserters are a special kind of bandits. The biggest difference between them and the more common brigands is that Deserters are usually stronger, and have much better equipment. This is because their gangs mainly consist of regular faction troops, sometimes appearing in big groups of high-tier units.

Deserters are soldiers who have left their kingdoms to live as "free brothers". The player can encounter them anywhere, but they are more common in border regions where conflicts have occurred. They usually come in medium sized parties of a single troop type, e.g. 20 Swadian Militia. Due to the higher quality of the troops in their parties, deserters are often more hostile than similarly sized parties of Looters, and will usually drop much better equipment than other bandit-type parties. At early levels, low to mid tier infantry Deserters are good targets, as they usually have decent gear to be looted, provided you are mounted and have a lance of some sort or a powerful ranged weapon. Most Deserters will lack any kind of ranged attack or weapons long enough to counter a solitary rider gradually tearing away at their flanks. A particularly skilled player, even early in the game, may choose to attack higher tier infantry or even cavalry, as enemy riders often cannot compete with the more intelligent maneuvering of a human rider.

As Deserters that split off from a lord's party will always be made up exclusively of a single troop type, unless they have freed prisoners from another party, specific strategies can usually be devised on how one wishes to deal with them. Infantry and archers can usually be trampled by groups of cavalry with little worry, while heavy cavalry should usually be lured or chased into favorable terrain before they are engaged to minimize friendly casualties. Light and skirmish cavalry can be dealt with by holding firm in a deep formation or simply crushing them with heavier cavalry.

If they encounter the player, they will demand some amount of money and if not paid, they will attack. The price is based on a percentage of the player's current balance in their inventory.

If the player's party's morale has reached a certain low point, and the player does not have enough money or food to sustain the party, then half of its members will break off and form deserters. They will immediately engage the remainder of the player's party, without giving a chance for the player to escape. The types of troops that will defect are selected at random.

Deserters will never be basic recruits or top tier troops, always stopping at the fourth tier of a faction's troop tree. The apparent exceptions are Khergit Lancers and Nord Veteran Archers, which are the highest tier melee and ranged units respectively available to the Khergit Khanate or the Kingdom of Nords, but are also fourth tier units (Khergit Veteran Horse Archers and Nord Huscarls are the actual highest tier troops of these factions).