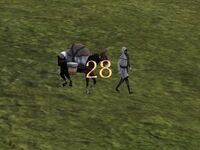 Caravans keep the trade flow alive in the land of Calradia.

There are caravans from every faction, and they travel to any and every town.

If a caravan that you are escorting to a town gets attacked, you can help it fight off the attackers. Sometimes, if the caravan was fighting against overwhelming odds, you get an increase in relationship with the "Commoners" faction (this does not seem to have any impact on the game). This is only relevant to caravans that appear through a quest from the Guild Masters.

Caravans usually have 25-40 mounted guards and one Caravan Master. They will employ several of their faction's low-mid tier footman and archer units, though the Khergit Khanate is an exception as they lack any infantry that qualify for the minimum tier requirements.

The maximum number of caravans depends on the number of towns a faction has.