Bunduk was born near Jelkala. He is a veteran Rhodok soldier who garrisoned a town for 20 years until his newly appointed commander, who was a young noble. He had a conflict with the commander when Bunduk unstrung his crossbow due to rain, but the commander viewed it as dereliction of duty and had him horsewhipped. He soon deserted his post and got drunk in a nearby tavern, using the money he stole from the captain, until he met the player who can offer him employment.

Loyal and righteous in the laws of military, although he has some dislike toward the noble bloods who tend to abuse their power, especially when they are in high positions. He still has his hatred to the blue-blooded nobles because of their punishments with no causes towards the common folk and would always give thought about equality of justice between all people. He also thinks for those lesser than him, for the sake of their lives, like children.

He admires people who continue to show off great results in battles even in an old age and would also like to teach people who are younger than him about battles and such. In certain times of battle, he doesn’t like people forcing him to do things unless he respects them and has a loathing towards people who even act as royal blood even though they are not really one to begin with. He is also rational in terms of rewards from battle and doesn’t take lightly on having petty rewards like poems and songs. He has extreme concerns to those who are poor and would never take advantage of them.

Armed with a crossbow, Bunduk is best used as infantry. Recruiting Bunduk costs 200 denars and his initial level is 9.

In Warband, should he be offered a fief and a lordly title, he will accept the fief, but demand that he be called Tribune Bunduk. Giving Bunduk a fief may cause a decrease in the player's relation with some of the nobility. If elevated to lordship, Bunduk will recruit Rhodok soldiers to fight for him and man his fiefs. 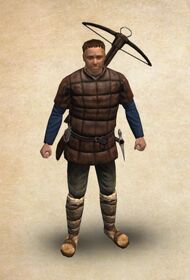