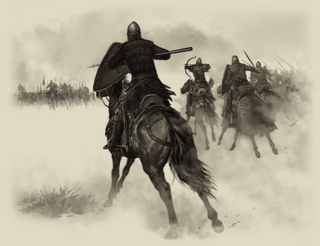 Battles are a large and frequent part of the Mount&Blade series. They help you progress through the game by generating experience, money, renown, loot, prisoners, and can directly increase weapon proficiencies.

Battles can be conducted in either of two ways:

One of your options is to allow your troops to attack without you, allowing the game to generate your losses and the enemies' losses until one side emerges the victor. This is highly unfavorable however, as the calculator the computer uses often inflicts 1:1 casualties on your troops no matter what their quality is.

The second option involves directly leading your troops in combat. This is the best way to engage in any battle because your presence can easily beat staggering odds.

At the end of the battle, you will receive the after action report which will tell you the casualties, allow you to take prisoners, and collect loot.

Different terrain requires different tactics and formations. Dismount your knights when the battlefield is mountainous, and attract your enemies into deep rivers and slow them down.

Using commands is another way to improve your chance of victory or to reduce your losses.

Using the number keys (default setting) you can select a portion of your army (such as your infantry, cavalry, or archers) and give them an order with the Function keys (F1-F11 with default settings) to hold a position or follow the player etc.

If you hold Shift, you can select more than one troop type at the same time.

Hit the Backspace key during the battle to see a list of all the available commands.

4. The two unit types that were not previously selected (e.g. if Cavalry is selected, it will select Infantry and Archers)

(Note: the above hotkeys are for classic Mount&Blade, Warband provides a different and broader set of options.)

(With Fire & Sword only) 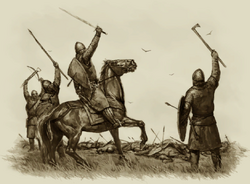 There are many things to consider when planning a battle, including your surroundings, your army composition, and your own style of play. These factors will determine your best course of action.

Here are some basic tactics that can be very useful.

Neutralizing enemies is not the only way to the victory. In Warband and With Fire & Sword, enemy units may flee the battle if their morale is reduced to a certain value.

Enemy units have their own morale value, which is determined by recent battle outcomes.

Enemies will not start running from battle until at least 45 seconds have passed.

Archers and crossbowman are much more effective when positioned on hills.

Troops without ranged capability can avoid volleys of projectiles by being positioned behind hills.

With heavily armored troops on foot, a slow advance can be best at times, such as against large numbers of ranged enemies.

Foot soldiers of any kind can benefit from being in a compressed formation when fighting cavalry.

Cavalry can be used to distract an enemy army while your other troops relocate.

If you order your infantry to hold position and keep formation, only their cavalry will charge and their infantry and archers will reach you much later. This will prevent your army from breaking up (when your advantage is similar/higher, this is always true). 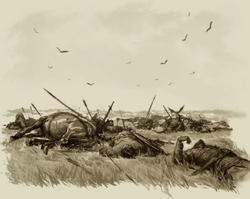 If your advantage is miserable, any type of any troops of any kingdom will charge mindlessly against you.

Kingdom of Swadia always seems to have "prepare time" to line their cavalry before charge.

Some less obvious strategies can win you fights that are insanely in enemy favor.

Retrieved from "https://mountandblade.fandom.com/wiki/Battle?oldid=59552"
Community content is available under CC-BY-SA unless otherwise noted.