Banners are flags that represent specific Vassals or Monarchs. The owners themselves will fly their banner on the world map, but it will also be flown over their towns and castles.

During character creation, if you choose to be the child of an impoverished noble, you will be given the option to carry a banner from the start of the game - otherwise, you don't receive a banner until you have become a vassal or monarch. In multiplayer you will be able to choose a banner right from character creation. You will also have the option to refrain from choosing a banner and use the faction's banner instead.

Your own banner will also be planted in the ground during battles at your side of the battlefield right next to your inventory chest. This makes finding your chest if you need to swap equipment or reload arrows much easier.

Your emblem will also be displayed on most shields and Heraldic Mail, whether you are wearing it or any of your troops.

Since most banners are already in use, if you choose one that is, its original owner will receive a red and black

checkered banner instead, which is not available to the player. However, if you do not choose a banner, this "default" banner will be seen in battles above your party's troops. Once you decide to choose a banner, your party will be labeled with your new banner, while the "default" banner will still be used by friendly forces that do not belong to any named character (e.g. foragers or caravan guards).

There are a few banners that are not already in use, however. If you use the cheatmenu to change your banner again, your old design does not return to its former owner, rather there will be multiple lords with the same checkered banner.

Warband added a new faction with new vassals, and so expanded the number of options to choose from. The following displays all banners as seen in Warband, altogether there are 128 flags to choose from. 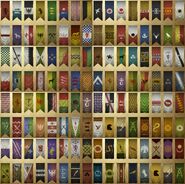 All Warband banners in one simple image

Banners of the faction leaders

In keeping with the historical nature of With Fire & Sword, many of the banners are based on flags and standards from history, such as the flag of Sweden, the banner bearing the knight and eagle of the Polish-Lithuanian Commonwealth, and the rifleman icon of the Cossack Hetmanate. Unlike in Warband, players have no option of starting the game as a noble, so they cannot carry a banner until becoming the vassal of a nation.

Nations themselves also have banners, but these are only seen in Custom Battles and multiplayer above friendly troops. In multiplayer nation banners also appear on the field in some game modes.

All banners in one image, including the missing one

Excluding nation banners, a total of

banners appear in the game, however the files include

banners. Out of the 6 not included, 5 are actually repeats of ones that are included, so the only banner that is truly excluded is shown to the right. However, it is not true that it does not appear in the game at all; once you become a noble, if you choose a banner that happened to already be in use, then the original owner's party and fiefs will fly this banner on the map, but on the character screen it will show a banner similar to that of Hetman Bogdan Hmelnitski, without a triangle cut at the bottom. However, in battles, the character whose banner was "stolen" will have a plain white circle above.

Occasionally a faction banner appears on the map if the player chooses a banner that is already in use. So if you see either a faction banner or one similar to the one on the right, it is likely you have encountered a bug.

Even the game has only five nations, replacing the five classic factions, the banner of the Sarranid Sultanate from Warband still appears unchanged in the files of With Fire & Sword.

All the banners available in the Viking Conquest DLC. A total of 177 banners.