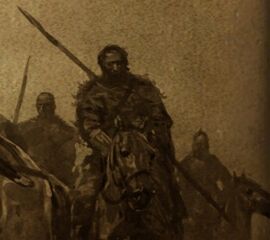 Bandits are neutral criminals that roam Calradia. Bandits engage everyone, including the player, small kingdom parties, caravans, village farmers, and any other parties smaller than their own. They usually demand money from the player character and will attack if not paid. If the player has slain multiple groups of bandits and is accosted by them, they will reject payment and simply attack the player.

The many bandit types in Calradia can usually be found in or around their home areas. For instance, Steppe Bandits roam the steppes and Desert Bandits roam in the desert.

Manhunters are law enforcers who patrol the northern parts of Calradia, hunting for bandits and taking them prisoner. They only use blunt weapons to knock enemies unconscious. In With Fire & Sword, Manhunters are replaced with Marksmen of the Secret Department.

These bandits were removed from the game before release and only exist in beta versions.

The following types of bandits were introduced in the original Mount&Blade.

With Fire & Sword shares some of the same bandits as Warband, but the game's new setting also introduces new bandits.