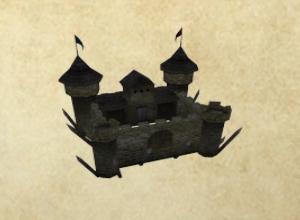 For castles in With Fire & Sword, see Fortresses.

Castles are fortifications found all over Calradia, and each one is linked to a nearby village.

In order to take control of a castle away from an opposing faction, you must besiege it. Note that you must have a negative relation and at least 10 troops before being given the option.

When you enter a friendly castle you can enter either the courtyard or the Lord's Hall. In the courtyard, you can speak to the guard of the dungeon to open a dialogue where he might grant you entrance depending on your choices. If you do gain entrance into the dungeon, you can recruit heroes or rescue lords trapped inside. In the Lord's Hall you can talk to any visitors or the lord and lady if they are present at the time. Here, you can gain quests from the lord or lady to gain their favor. In a neutral or enemy castle you can also request an audience with a lord who is currently residing in the castle.

Castle garrisons tend to number in the 100-150 region and, as such, are an easier target than towns. By mid-game, a player usually has a party capable of taking a castle unaided.

Castles generate the lowest tax income, usually fewer than 1000 denars, though this can vary depending on the prosperity of the castle's attached village. Troops garrisoned in a castle are paid half of what they are paid in one's party. Thus, when training an army, one may leave their fully trained troops in a castle while going around picking up new recruits and training them, resulting in faster movement speed and cheaper upkeep.

Mount&Blade: Warband adds the ability for castles to hold feasts, and increases interaction with prisoners by adding missions where the player must rescue a prisoner (usually a quest-giver's relative) from the castle where he is being held. The player can bribe the guard to let him in or take the key by force, resulting in the castle guards becoming hostile to the player.

There are other ways for a faction to capture a castle in Warband other than just besieging it. They can also wait for the food supply of the castle/town to run out, and then take control, or if a lord holding a castle/town defects without being indicted, it will go to the new faction defected to.

Should the player conquer a castle without being sworn to a liege, he takes the castle for himself, and founds a new kingdom. When the kingdom is founded, the player is asked to appoint a minister who stays in the Lord's Hall and offers kingdom management options. If the player conquers a castle when they already have their own new kingdom, they are given a list of Vassals that are with the player's kingdom to take control of the castle, the option for the player to take control of it is available, and the option for the castle to have no Lord is available as well.

If the player chooses one of their Vassals to become the Lord of the castle, reputation will be modified with all your vassals, depending on how well liked the chosen Vassal is, and how many fiefs they already own. The castle then will be automatically garrisoned by troops.

In Warband, the castle will be a drop off point for villages with no major town to go to. This only happens if the castle or town that the village is connected to is captured, so that the castle and town are no longer part of the same faction.

The following is a list of all castles seen in Mount&Blade.

Warband's castles are mostly unchanged from the first game, simply adding the Sarranid Sultanate as a new faction along with all of their castles that did not exist in the original game. Tilbaut Castle is the only other change, having belonged to the Kingdom of Vaegirs in Mount&Blade and the Kingdom of Swadia in Warband.

Retrieved from "https://mountandblade.fandom.com/wiki/Castles?oldid=51870"
Community content is available under CC-BY-SA unless otherwise noted.